Matthew and I had been dating for a year and a half before we finally got engaged. I was so anxious to get that ring and start wedding planning, but Matthew had a different plan! In the end it was perfect the way he did it, and he even got to teach me patience along the way. 😉

Every time we went on a date, I was expecting a ring. And every time it didn’t happen, I would get into a bad mood and pout. Matthew probably thought I was crazy! Thankfully, he loved me and decided to stick it out. 🙂

The day was July 8th, 2014. It was my 27th birthday. I spent the day at my friend’s pool with some of my favorite friends. All day long, we talked about how he could propose to me that night. I basically told them that he better propose, or else I would be so upset. Towards mid afternoon, I went inside and started getting ready. My friend Rachel did my hair, I made sure my nails were done, and off it was to my birthday date!

Matthew took me to dinner at Joe T. Garcia’s in Fort Worth. I love this place for many reasons, but one reason is because we had gone there for his birthday and that was the first time he mentioned getting married. 🙂 I was so nervous! However, he was acting completely normal. I thought he would be acting weird/nervous… but nope. Completely and totally normal. So I texted my friends that I had spent the day with and said, “Yall, he’s acting completly normal. It’s not going to be happening tonight, I can just tell! I’ve got to let it go, or it will ruin my birthday!” And then, I really did try to let it go….

After dinner, we were walking back to the car, and Matthew says, “Hey, why don’t we go to the Fort Worth Water Gardens?” I responded with “YES!” but in my head I thought, “Maybe he really is going to propose! Why else would we go THERE??”

Then we get there… and we can’t find a parking spot ANYWHERE. And he says, “Oh well, let’s just go home.” And I think: “OK, he’s obviously not going to propose. Because if he were… he would be freaking out a little bit more about not finding a parking spot!!” But out loud, I just say, “OK, that sounds fine.”

Then two seconds later, a parking spot opens up. He pulls in and says, “Ok, let’s just go!” Then we walk around the water gardens, (which, by the way, are beautiful). We get to this section of the water gardens: 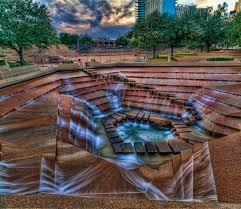 and he says, “Hey, let’s walk down to the bottom!” So we start walking, but I chicken out after a few steps. (Give me a break, the stairs were wet and I was terrified of slipping in my shoes!) So we head back to the top. We are sitting at a bench, overlooking this view, and he says, “Do you want to open your birthday present?” So of course I say YES! He hands me a tiny bag. I reach in, and I feel a tiny jewelry box. My heart stops. And I think, “Holy crap! This is my ring!!” I pull it out, open it (with my heart beating 1,000 beats a second)…. and it’s pearl earrings.

Beautiful pearl earrings…. but pearl earrings. Not a ring. I was so bummed. I mumbled a thanks and threw them in my purse. (Ok, so I was also being a brat.) Well, during this time, Matthew had gotten him and walked behind me. He was standing up, and got me to stand up with him.

He starts telling me all of these sweet things about how much he loves me and how wonderful I am to him. I probably should have been paying attention more, but honestly in my head I was thinking, “He just realized that I thought that was going to be a ring, and now he’s saying all of these sweet things to make up for it because he just realized that he might have just ruined my birthday….”

But then, all of a sudden, he’s reaching into his pocket, pulling out another box, and getting down on one knee. He tells me he wants to spend forever with me, and asked me to be his wife!

I just remember saying, “What? What? Are you serious?” over and over again!

Obviously, I screamed YES!! (And maybe an “It’s about time!”, too… but hey, don’t judge!) Man, it was such a rollercoaster of night, but it had finally happened and I was THRILLED!! Afterwards, we facetimed my entire family to tell them the good news. Then we went to his parents house to tell them, too!

After all of our families knew, we headed to BJ’s Roadhouse for a birthday dinner/engagement celebration pazookie. And it was delicious. 🙂

I have decided to use my mini “on the go” planner as a gratitude journal during this time that we aren’t on the go! I am excited to start using it this way today. Head to my channel to see how I made this spread! - - How have you had to change your planner line up due to this new way of life?! - - @the_happy_planner #thehappyplanner #plannerbabes #planner #planneraddict #embracethediscs #kellofaplan #planwithme #minihappyplanner #happyplannermini.
REMINDER: My first ever sticker book releases MONDAY at 10:00 am central on www.kellofaplan.com! - Tag a friend in the comments so they don’t forget!!! - - - #planner #plannerbabe #planners #plannerlife #sheplannedalifesheloved #kellofaplan #planwithme #livecreatively #planahappylife #kellofaplanstickerbook
This week I’m embracing spring in my planner! I love these stickers and this color combo. It’s making my heart super happy. I hope you’re prepared for spring because it means my planner will be full of florals!! Oh wait, it’s always full of florals. 🤣🤪 - - What are you looking forward to this week??? What’s something you’re writing in your planner that fills you with joy?? Share below! Let’s focus on the POSITIVE during this time! - - Head to my channel to watch this “plan with me” video! - @the_happy_planner #thehappyplanner #plannerbabes #planner #planneraddict #embracethediscs #kellofaplan #planwithme #beforethepen
When I started planning in 2015, I never would have dreamed that I would one day make my own sticker book. But here it is! My first STICKER BOOK!!! I designed it all in my own and had it manufactured all on my own. I’m so proud of it!! It releases on Monday at 10:00 am on my website!! 😮🤯 Have you seen the Flipthrough on my YouTube channel?! Which stickers are your favorite?! - - #planner #plannerbabe #planners #plannerlife #sheplannedalifesheloved #kellofaplan #planwithme #livecreatively #planahappylife #kellofaplanstickerbook